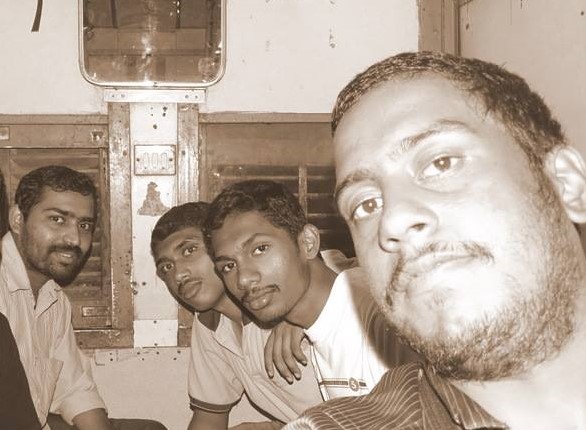 This is a non tech writting. This article was published first in Geominds blog
This is the story of Geominds. “How Geominds was born?” - A startup story naratted by the co-founder!

Geominds, unlike most other organisations (or companies), did not form after years of planning and research. It was formed after a fateful train journey with some like-minded people in 2014. FOSS was a major factor in our formation; it was a shared passion among our founders, well-wishers, and advisors, and hence our philosophy was also moulded from it.

It’s late July 2014 in the foothills of the scenic Western Ghats. The local governing authority or ‘Panchayat’ of Koorachund village decided to host a Mapping party for developing the geographic expanse that fell under their ward (electoral constituencies of the local body) and to improve upon the boundary map of the village panchayat. The area was unsurveyed till then, and a lot of its resources and secrets were beyond the knowledge of the government. The panchayat area consisted of reservoirs, wildlife sanctuary, forests, private farms, etc. and was declared as an ecologically sensitive area too. Jaisen Nedumpala, then-Assistant Secretary of the panchayat, came up with the idea of using crowdsourced mapping to simplify the gargantuan task in front of them – “the OpenStreetMap”. Twenty two volunteers and five days later, the panchayat created not just a ward-level boundary map but much more. The project, designed by Mr Jaisen and the team used for its entirety Free software technology and OpenStreetMap. It was a beginning not only for us but also an introduction to participatory, people-centric local mapping for many others.

Later that year, the project designers of the Koorachundu mapping party, Jaisen, and ark Arjun were invited to share their experience in the Fifth International Free Software Conference Swatantra 2014 organized by the International Centre for Free and Open Source Software (ICFOSS), an autonomous organization set up by the Government of Kerala, for the propagation of FOSS. The conference was to be inaugurated by the father of the Free Software Foundation Richard Mathew Stallman aka RMS himself which boosted our energy again. Needless to say, it was an inspiring event and would prove to be an important milestone in the formation of Geominds.

On the return journey after the Conference in an empty general coach of a train, some way into a routine discussion between our co-founders Arjun, Jaisen, and some of our well wishers, the gap between the reality of our current geospatial world and available technology became suddenly exposed. We all seemed to agree that FOSS technology could accelerate development in the field and help solve problems of demand vs supply. Hiran Venugopal, always the energetic entrepreneur, put forward the life-changing question in his typically forthright manner. “Why can’t you people start an organisation for geospatial technology?” Hrishikesh Bhaskaran, another FOSS activist immediately voiced his support; “There is an untapped potential to expand the use of Free Software in the Geospatial world; you guys understand both and so have the know-how to effectively bridge the gap.” A spark was ignited, a rocket full of ideas launched in the minds of our founders. Geominds was born on that train!

From 2014 to 2016, we were involved in many projects of dimensions small and large, showcasing to clients and the public, the power of geospatial technology. We tried to minimise the divide between requirement and availability of Geospatial resources from within our limited capacity. We were among the pioneers in successfully exhibiting many technologies and methods in the industry and to the general society, like crowdsourced map development, open map data, map-based data visualisation etc. The Koorachundu Model designed by our co-founders was internationally appreciated and was presented in various conferences including FOSS4G India 2015 held at Indian Institute of Remote Sensing(IIRS), Dehradun (A geospatial institute under Department of Space, India and affiliated to ISRO), and State of the Map 2017, held in Japan (State of the Map is an annual event for all mappers and OpenStreetMap users) [watch recording].

Jaisen at State of the Map 2017, Japan Jaisen Nedumpala presenting the Koorachundu Mapping Party Experiment in FOSS4G at IIRS.

2016 to 2018 was a relatively quiet period for the company due to various reasons, but stage two of our ignition was completed in late 2018. We started collaborating with other organisations and projects, which led to the realisation that we needed to evolve into a legally acceptable entity to achieve growth as we envisioned. Yet another OSM event became the launchpad for our second stage, State of the Map Asia 2018. We, as GeoMinds, officially extended our technical support to Koorachundu V2, an improved second mapping party organised after the profound success of its first version. This was later taken as a model for community-sourced mapping by the Government of Kerala.

This transition into an official enterprise led to more members and advisors joining the team at different periods, all of whom shared a common vision of building a geospatial ecosystem in FOSS that was capable of providing solutions to real-life problems. Hence our description of ourselves as “A group of individuals with an inherent craze in Geospatial Technologies like Remote Sensing, Geoinformatics, GIS-based Data Visualisations, other allied technologies and techniques.”

With time, we realised that being just service consultants/providers was inadequate. We needed to innovate and build around our ideas in order to provide the advantages of spatial technology for the benefit of a wider community. We took the first steps toward becoming a solutions provider rather than a service consultant and set upon developing products required for solving real life problems spatially, with emphasis on quality, ease of access and cost-effectiveness.

Any Comments on the article? Let us know @Geominds.